Allora oggi . . . is my last full day in Italia and I will be spending it in Roma.  Davvero!   So hard to fathom after months of planning, saving, and preparing followed by two months of execution, study and travel that my experience in Italy is winding down.  Shortly after arriving at the Roma Stazione Termini and checking my bulging bag, we headed over to the Museo Nazionale Romano for some ancient Roman culture where I quickly discovered most of the Roman sculptures are Greek knockoff’s.  Out on the sidewalks and nearly every other corner . . . more knockoffs.  An assortment of knockoff designer bags, sunglasses, watches nearly anything a tourist could want, and then some.  This got me thinking about the impact of culture and globalization.  Globalization’s been occurring for centuries.  The evidence of globalization is everywhere in Rome and throughout Italy for that matter.  Saturday our agenda included a trip to the Museo Nazionale Etrusco, which houses an amazing and extensive collection of Etruscan artifacts.  The Etruscans predate the Romans in the Tuscany region of Italy and their antique relics provide evidence of Greek influences.  We had the most delightful and knowledgeable tour guide (Theresa Potenza) who also happened to specialize in the Etruscan’s for her thesis.  If you want or need an excellent tour guide while in Rome, I recommend Theresa.  (http://italywiththeresa.blogspot.it/)  Restate sintonizzati . . . 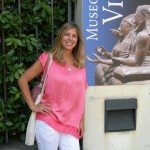